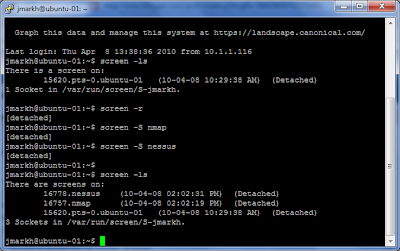 Today, majority of people are using Windows but what I’m going to talk about is Screen.

Screen is a GNU utility that allows you to use multiple windows (virtual VT100 terminals) in Unix/Linux. Although, if you have a console access, you could spawn multiple terminals, there are two features I would like to highlight.

First, is the fact that screen stays active, even when SSH session is terminated. All processes initiated will keep running and could be re-attached once SSH connection is re-established. Furthermore, since screen session initiates a separate process rather than login session, it is more resource efficient.

Here are some commands/shortcuts that could be used with Screen (note that every screen command begins with Ctrl-a):

The man pages for screen are quite readable and make a good tutorial.